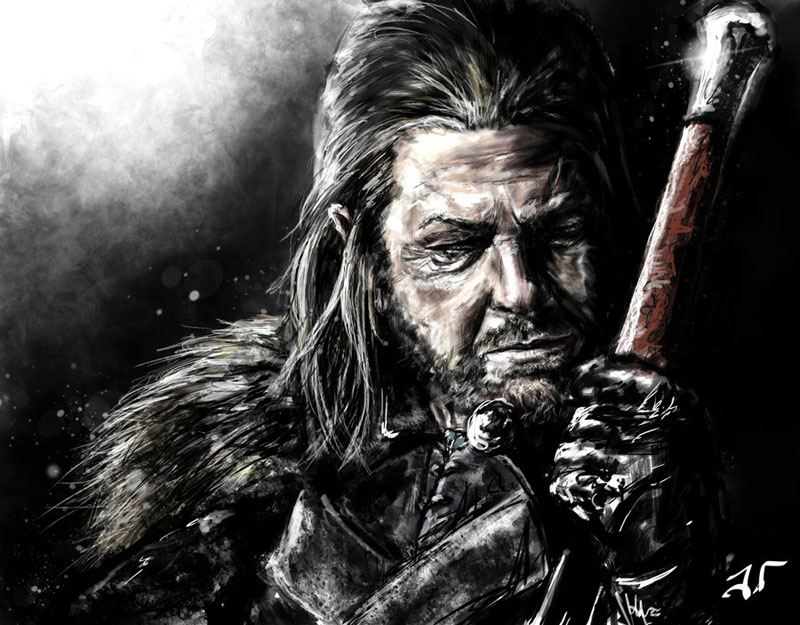 A Game of Thrones by George R.R. Martin has no doubt become very popular, both the TV series and the books. One of the best characters in this epic story is Eddard (Ned) Stark. To give a short summary of the books is impossible so you MUST go and read them because they’re absolutely fantastic!

I’ll start off by saying that it’s interesting how the character is an honourable Lord who is respected and looked up to by his children, yet heÂ has a bastard born son, Jon Snow. The conflict that this brings is that Ned fathered a child out of marriage, which most don’t see as very honourable… This is mentioned often in the books and the knowledge of who Jon’s mother is, is kept a mystery for a very long time. The author does give the character excuses, from being very young to not having feelings for his wife because the marriage was arranged, and, of course, the fact that he is human. This may have even foreshadowed the decision that he made at the end of the first book (see below).

*****BEWARE: SPOILER BELOW!***** Don’t look below the picture if you don’t want to know what happens to Ned Stark…

Ned Stark’s death comes as a blow to the reader because he’s such a likeable character!

Some believe that Ned Stark was undoubtedly an honourable man and some fans may even say he wasÂ tooÂ honourable, so much so that he lost the game of thrones due to his stubbornness on the one hand and Â lack of political strategy on the other. However, I personally don’t believe that his honour killed him because he was able to swallow it whole by admitting his ‘treason’ in front of the whole Kingdom.Â In my opinion I think he dismissed his honour here because he lied to the Kingdom about lieing about the future King being a child born from incest, he lied when he clearly knew it was truth. Once again, I believe this was foreshadowed by his previous lapse in honour when he fathered a bastard son.

He admitted treason to spare his own life, be it for himself, his children,Â his wife or to continue to be a chess piece on the table. It matters not however because it ended with CHECK MATE when Joffrey Lannister ordered his head off his shoulders. However, he was still killed for ‘playing the game’ simply because the boy King, Joffrey made up his own rules. It’s clear that Ned Stark knew how to play the game of thrones and instead it is the child who did the unexpected and went against Queen Cersei (his mother’s) plans.

Throughout the rest of the books, all the characters who were familiar with Eddard Stark note his amiable qualities, so in fact he is remembered as a great and honourable Lord.Â After all, is it not to be remembered the true game of thrones?

Visiting London for my 27th Birthday

Last Week I turned 27. Although it isn’t a big milestone, like becoming 30, it still feels older than ever. I keep thinking that…