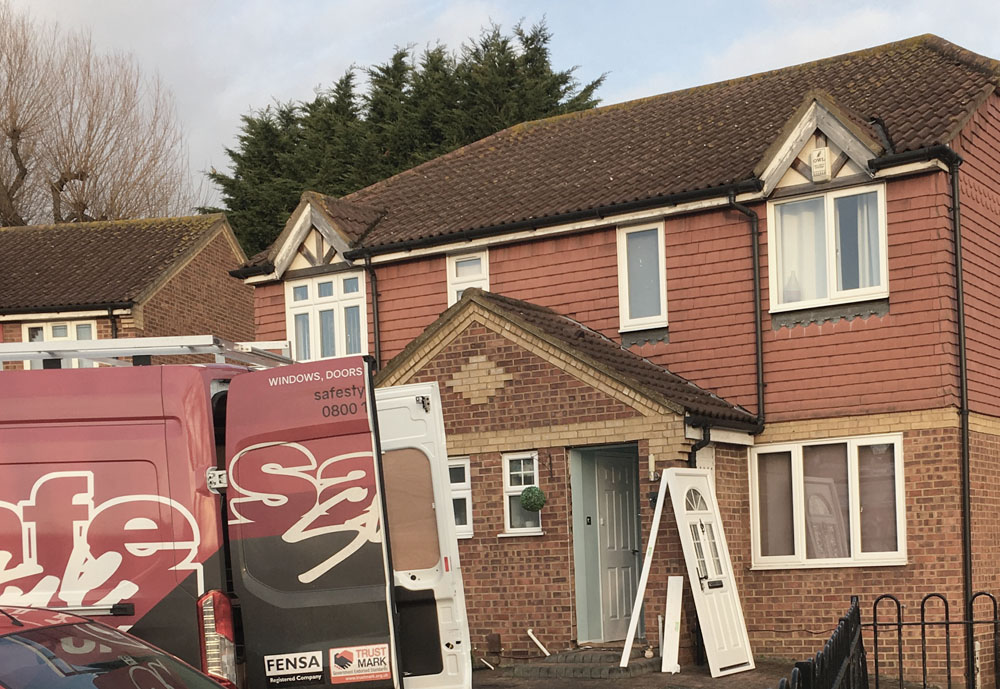 After a drafty winter we finally decided to get new doors.

By the state of our front door especially, it seemed as though that the previous owners swung from the door’s handle. The frame itself was rotting and it looks like someone has tried to fix it many years prior because, like many other things in the house, they did an awful job replacing one of the components for the locks.  Don’t get me wrong, it still worked well… you just had to lift the door when you shut it.

As we inquired about the front door, we thought we might as well get the patio doors replaced too. Who cares that we won’t be able to afford night’s out any more and cut down here and there, right? We thought it was much more important to improve our house and make it energy efficient and ensuring it’s secure.

Really sorry guys but I’m sharing a limited amount of photos. We’re just very conscious that this blog is open to the public and don’t want any nasty issues so please be aware that we have a German Shepherd dog and a good alarm, plus, don’t let me forget, a lovely neighbour.

Anyway, let me say no more and jump right into our renovating experience… 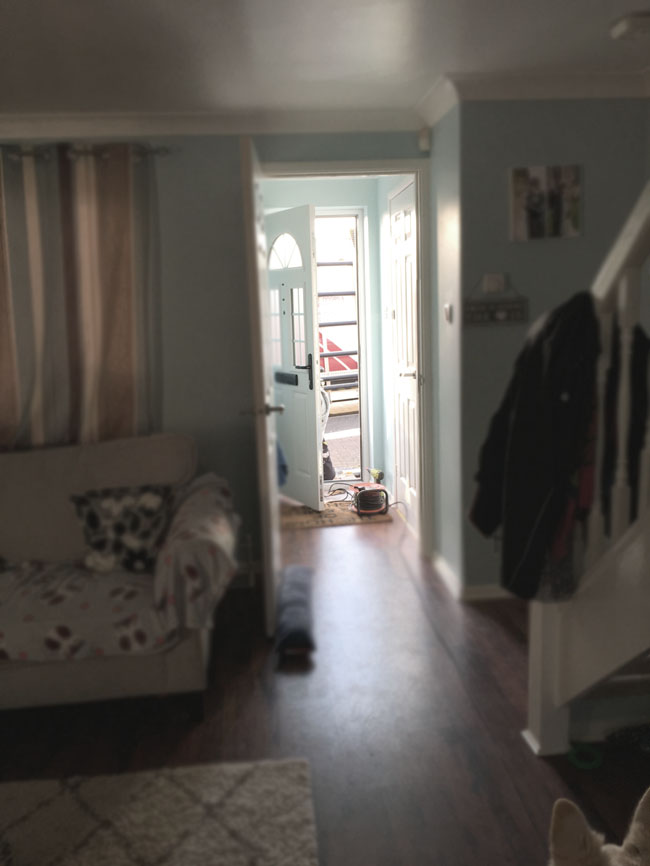 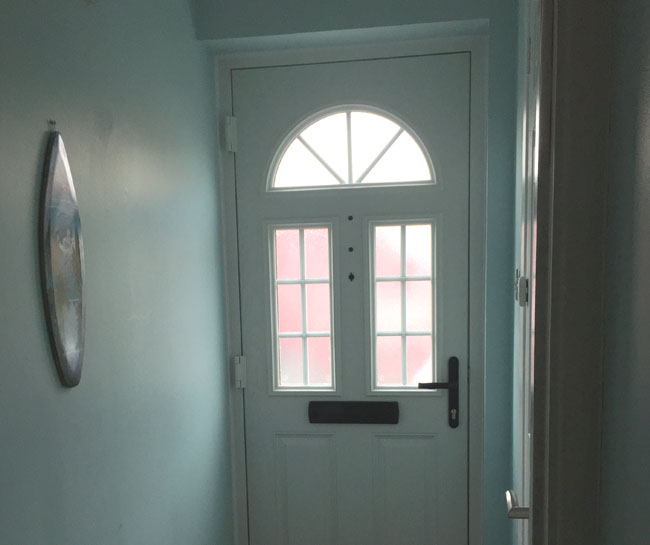 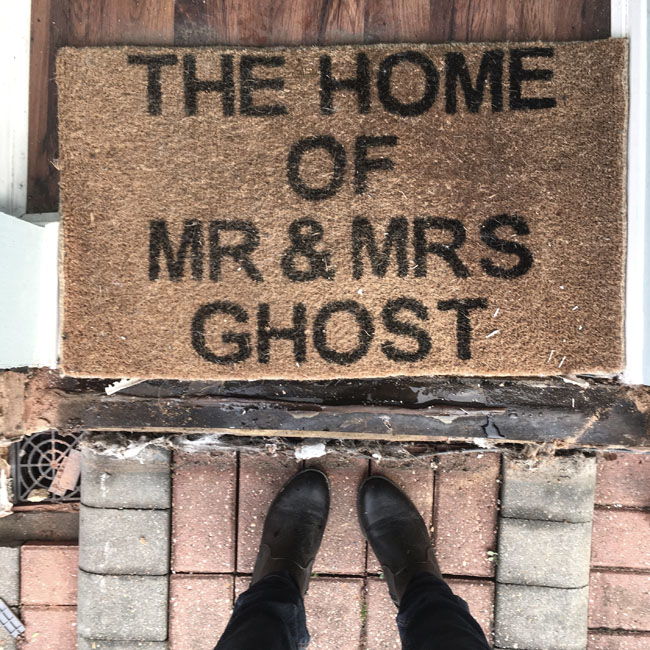 We asked Safestyle UK to come and give us a quote. The salemans was polite and chatty and spent near 3 hours with us explaining prices, styles and filling out forms. He talked a lot and in a usual marketing and salesy manner he repeated many things but nonetheless he was friendly and did not pressure us.

Firstly he inspected the doors and quoted us prices and then went into the detail, explaining our options for a front door. He showed us a video of breaking the different types of doors which I thought was a little farfetched as at the back of my mind I was wondering whether it’s a scaring tactic to sell up. However, it was interesting to understand the differences and benefits for each door. Luckily, they’ve offered us a ten year guarantee for any door we buy too but I’m wondering if that’s a standard now?

In the end, personally I thought it took a bit too long and I was sick of talking about doors but nonetheless I’m happy with the end result. I also very much hope that I won’t need to experience this, at least, in the next few decades (if not, ever again!)

Top tip: Be aware it’s not as easy as choosing the type of your door, i.e. PVC, but then you’ll also have to decide on styles, ways that it opens, accessories and even hinge colours.

Door Prices and Things to Consider

Looking at prices online I had a very ignorant view of how doors might cost. As I briefly browsed Google’s results I thought that a front door is around £300 average… How wrong I was!

Our front door alone was over a grand but remember that it included being custom made and fitted. Obviously prices depend on the type of door that you’re buying, with PVC costing the lowest. After some consideration though, such as deciding on whether or not we’re going to be staying at the property for a substantial amount of years before moving home, we decided on getting a composite door which was one of the more expensive doors. We were told that after much testing they’re hardy against breakages (and bullets?) and that they’re guaranteed to last, be energy efficient and might even go towards better house prices were we to ever sell.

Our accessories were included in the price but the type of glass and style that we had on the door was also something we had to pay extra for. For some inspiration feel free to have a look at my Front Door Ideas post. Personally, we were quite sensible and didn’t stray far from the original look. Before we chose it though we looked at several options and would ask the salesman to repeat prices, styles and types if we forgot in the process – don’t be pressured into agreeing into anything if you’re not certain.

In the end we paid more than £300, in fact, it was near 2 grand (EEK!) but luckily there’s the option of spreading the costs over a number of years in monthly installments for no interest which we took eagerly.

The measuring takes places by a separate appointment and individual. The man was quiet yet polite (I think we was afraid of my dog) and did his job in the space of about 30-45 minutes. Asked me to fill out some forms and answered my few questions. He also told me that my custom doors will be ready in about a month’s time and that I would get a call about arranging a fitting date – which I did.

I must say, I was very impressed with the fitting (there was one issue but more about that in a second.) Only 1 man arrived at our door step to fit a front door and patio doors. He removed the old and replaced them with the new in the space of a mere few hours single-handedly and whilst being closely watched by the intrigued German Shepherd in the Ghost residence. I was impressed that he removed the mouldy frame and was able to sort out all the bits and bobs and carry, lift and whatever else he needed to do to fit the doors, all but himself. And so quickly too!

The only downer in this experience that makes me not give it 5 stars is probably that the fitter walked away not only with our old doors but also our keys, which also included our only garage keys… Although it was our fault for not taking the keys off the old doors that day (form of habit), I would have thought that an experienced fitter would be used to asking standard questions whilst offering information about how to use the new doors. The latter he did well but the former, such as a simple ask of ‘do you want your keys?’ or ‘have you removed everything from the doors that you want?’ before putting it in his van, would have prevented the issue.

So, I called up the head office and told them that I need the keys that same day and luckily the fitter still had them but wouldn’t be at work again for another 4/5 days so we had to wait nearly a week for them to be posted through the letter box. Apart from this hiccup, which was fortunately dealt with in the end, the fitting was done to a high standard.