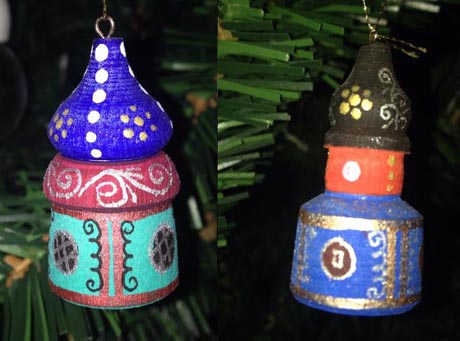 Forget Santa, it’s Ded Moroz in Russian, which translates to Father Frost. Basically, instead of a bearded old man bearing gifts in a red and white suit, it’s a man but in a blue and white outfit, which looks a bit warmer too – due to all the snow and that 😉

There’s also the snow maiden, called Snegurochka. I’ve been taught that it’s his daughter so it seems they both bring a joyful time to the people!

I see a traditional Russian Christmas full of blue and white decorations, patterned plates and dishes as well as traditional Russian dolls. To create a Russian scene at home simply think of a contemporary white interior added with icy blues and silver sparkles to mimic the lovely snow of Mother Russia.

Christmas decorations can play a big part too. I haveÂ decorative and almost oriental-looking miniature temples! I love these little things as they remind me so much of The Moscow Kremlin that I’ve seen many times as well as the numerous other churches that I’ve seen around the city.

As someone who left Russia at the age of 1 I celebrate Russian Christmas by making and eating all the Russian food and dishes that I can think of. However, as you can imagine Russian Christmas also has traditionally festive foods and they symbolise the 12 Apostles like fish, peas, honey, nuts and more.

Personally, and with no disrespect to the Russian Christian Orthodox religion, I much prefer the Russian food I remember my mum or grandmother making when I was younger that gives me that feeling of nostalgia, such as salads, many choices of meat filled pastries and, of course, caviar. To be honest, for me, Russian Christmas has become more of a memorial day for my heritage and Russian background. Such is the life of Russian immigrant living in England 🙂

Hope you Have a Happy Russian Christmas!

Have a look at this awesome monthly project I’ve launched at work. It’s a moving infographic on sleep depriving “monsters” that keep people awake…